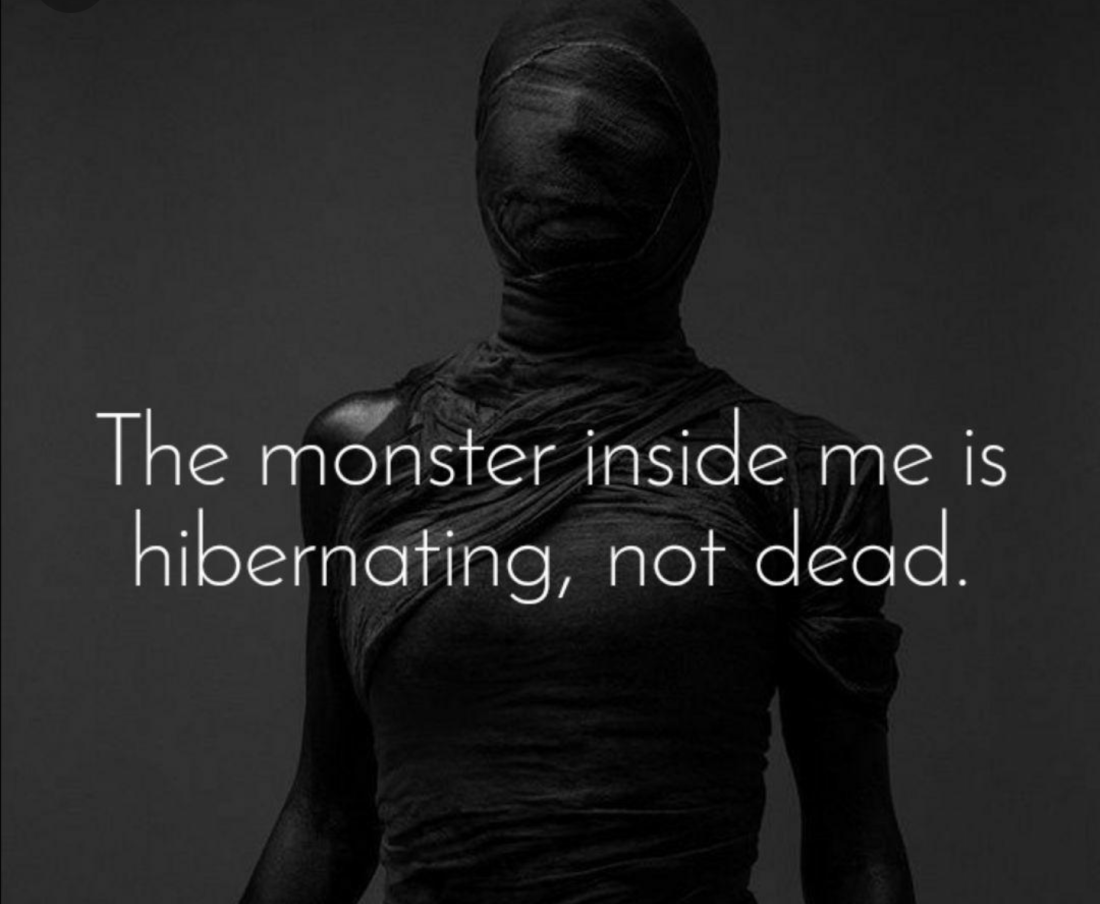 “The Monster Inside Me Is Hibernating, Not Dead”

Since I left the comfort and safety of my mother’s womb, and perhaps even before, a cruel monster with an insatiable appetite to harm (and ultimately destroy) me has been crowding my soul for space at the epicenter of my being.

Sometimes they bicker and shove one another.

Other times they ignore each other.

At the best of times, my soul receives the love, care, support, and tools necessary to keep this demonic force at bay, coexisting in a state of detente -perhaps attributable to mutually assured destruction.

At the worst of times, they engage each other in ferociously bloody battles. Thankfully, and with the grace of my Higher Power, despite having lost some significant battles, suffered substantial wounds, and being deeply scared, my soul has managed to prevent this heinous being from winning its war by destroying me.

Yes, I have Bipolar Disorder, which is “classified” as a serious mental illness. Yeah. It’s pretty serious. It’s been trying to kill me since I was 18. Now that I am 52, I have finally managed to find the combination of therapy, meds, spiritual practices, and lifestyle choices to keep the beast hibernating, one day at a time.

Here are some grim facts about the monster which dwells within each Bipolar sufferer:

“It’s estimated that between 1 percent and 5 percent of people worldwide have bipolar disorder.

Previous research has found that people with the illness tend to die early from heart disease and suicide, but the effects of other chronic conditions remained unclear.

For the new study, Dr. Casey Crump from Stanford University in California and his colleagues analyzed data on about 6.6 million adults living in Sweden between 2003 and 2009. Of those, 6,618 had bipolar disorder.

During that time, people with bipolar disorder died, on average, about nine years younger than people in the general population.

And rates of death from any cause – about 14 deaths per 1,000 people in the general population every year – were double that among bipolar people.

Suicide was a major risk with bipolar disorder – women with the condition were 10 times more likely to kill themselves than the general population and men were 9 times more likely, Crump’s team reported in JAMA Psychiatry on Wednesday.”

AA teaches us that we are never cured of our Alcoholism. It is “always out in the parking lot doing push-ups.” Waiting for us to stop working our program of recovery so it can take us out.

In a similar fashion, my Bipolar Disorder is a monster in hibernation. Always angling to tempt me into awakening it. And who’s to say that the next time I do, if there is a next time, it won’t overpower my soul and finally snuff me out?

2 thoughts on ““The Monster Inside Me Is Hibernating, Not Dead””