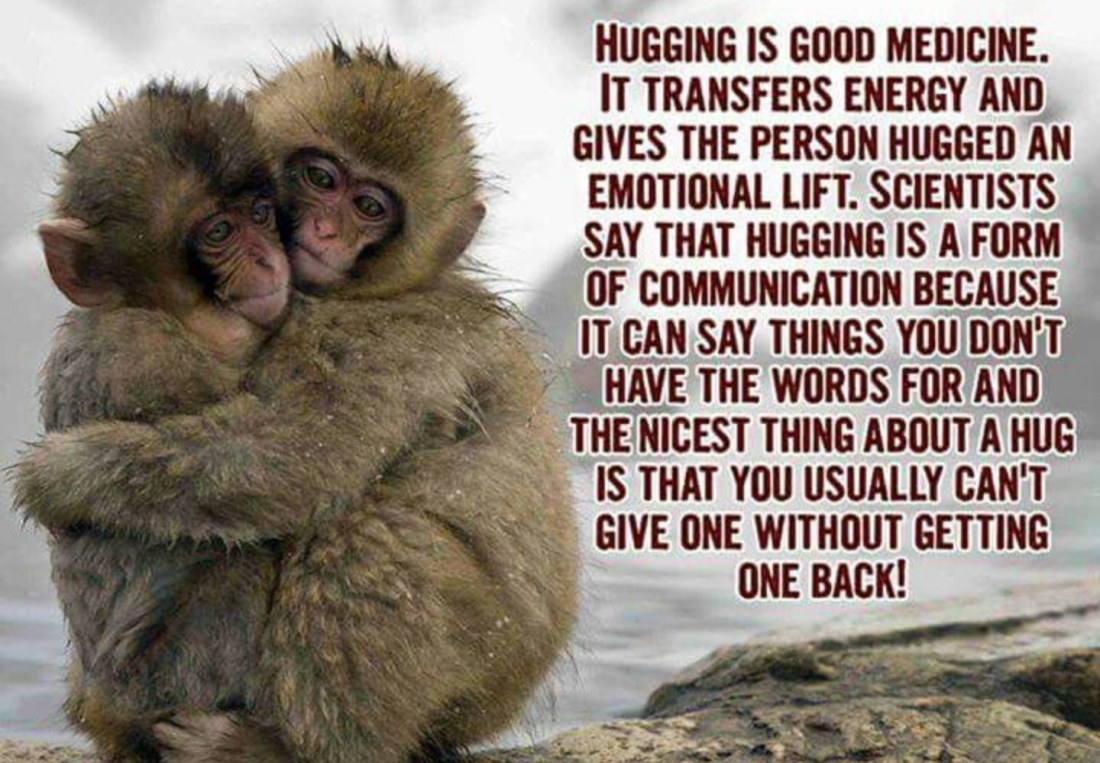 4 Benefits of Hugs, for Mind and Body

Security. A lot of time has passed since the Harlow studies, showing that poor monkey babies prefer a cloth doll without milk as a mother substitute over a metal doll with milk [2]. Worldwide we agree that babies need to be held. There is evidence that adults who were frequently hugged and cuddled during early childhood display fewer stress symptoms than less-hugged counterparts [3]. Physical affection also alleviates stress reactions in adults who report less existential anxiety even when touched only briefly [4]. We are simply wired to find touch reassuring, as many studies of first impressions show [5].

Positive Feelings. As adults, we can live without hugs, of course, but we do seem to be happier with them. We release the hormone oxytocin when touched, which elevates feelings of attachment, connection, trust, and intimacy. [6] When we’re hugged, we feel less lonely. I speculate that students feel less devastated by academic problems when well-hugged, well-assured, and well-bonded. Apparently, hugs facilitate social bonding and the experience of participating fully in this life, which, to me, is true happiness.*

Better Health. Another commonly mentioned benefit of hugging lies in our improved health, as when we are touched our heart rate, blood pressure, and levels of the harmful stress hormone cortisol are lowered [7]. Reach out and hug, and your life might not only feel better, but last longer.

Freedom. It’s a cliché to say that Asians cultures tend not to touch and hug, especially because times may be changing and people may be choosing not to fit in the same cultural box they always have. The intense longing for intellectual growth and freedom, the desire to build bridges between the West and the East, and the unprecedented curiosity and willingness to undergo the most taxing academic training all causes people to question everything. A young Chinese business woman who spoke to me about the need to break through glass ceilings in leadership positions thee—a need that we certainly share in the here—spontaneously held my hands while speaking about her ambitions. While talking to me about the courage it takes to travel alone to foreign countries, a Chinese woman I met in the subway suddenly embraced the friend next to her. Don’t get me wrong: It can be annoying to be touched by a stranger, or even by a friend, at the wrong time. And there will always be people who choose not to touch, such as the Zen monk with whom I had the privilege of talking at great length. But the emphasis here lies in choice. As people choose to leave a cultural box that insists on no touch, exposing their emotional and physical needs may be experienced as an overt sign of overcoming their fears and cultural conditioning.